After a six-month delay, the Village of Warwick finally held its re-organizational meeting on Mon., Sept. 21 and ceremoniously swore in two Trustees for four-year terms.

Trustee and Deputy Mayor Barry Cheney, who was re-elected to his position in the election held on Tues., Sept. 15, and newly-elected Trustee Corey Bachman individually took their oaths of office at Village Hall and signed the official register in the days prior to the Board meeting. During the Board meeting, held remotely via Zoom and available for public viewing on Facebook Live, Village Clerk Raina Abramson ceremoniously swore in Cheney and Bachman as part of the reorganizational meeting.

In order to effectively continue Village business, several Professional Service Agreements were approved on May 18 including legal services, engineering, accounting, computer and technical services. A list of these approved service agreements are on file in the Village Clerk’s office. The remainder of the positions were approved at the Sept. 21 meeting.

No Halloween Parade This Year

The Village Board denied a request from Village Recreation Director Ron Introini to hold the annual Halloween Parade and costume judging event, even in a modified way, due to the ongoing COVID-19 pandemic health situation.

The Board discussed at length the logistics, compliance issues and safety concerns of holding the parade and ultimately decided that, in the interest of public safety and a desire for a more low-key Halloween this year, the parade should not take place.

The Village Board also received a letter from a resident on Oakland Ct. expressing concern over the crowds that annually gather in the neighborhood off Oakland Ave. including Oakland Ct., Orchard St., Campbell Rd., and Welling Ave. The letter indicated that several residents in that neighborhood planned to “go dark” on Halloween in an effort to discourage the crowds and that a cancellation of the Halloween parade would also help with this effort.

“Many of us don’t even have children, and the pressure from various parents groups saying we want to take away Halloween from the kids is false. But for one year, I know my family would appreciate focusing on what’s safe and healthy for EVERYONE,” the resident wrote.

With Halloween falling on a Saturday this year, Trustee Corey Bachman pointed out that the extension of outdoor dining on Main St. through the end of October further complicates the logistics of holding the annual parade as diners would be seated along the traditional parade route.

Moving the parade to the confines of Veterans Memorial Park off Forester Ave. was proposed along with potentially limiting the ages of the participants in the costume judging contest. In the end, the Mayor and Trustees agreed that, for this year, the parade should not be held and that a more low-key, close-to-home Halloween should be encouraged for the safety of all.

The Warwick Grove Homeowner’s Association (HOA) has requested the use of parking spaces in Veterans Memorial Park, off McFarland Dr., to store snow removal equipment during the winter months to easier access in the event of a storm. The Village Trustees continued the discussion on this request at the Sept. 21 meeting.

Trustee Bill Lindberg took photos of a similar storage area in Homestead Village, which is next to Warwick Grove, and commented that “it looks terrible.” In addition to being an eyesore, Lindberg pointed out that there are oil leaks where the equipment is stored, which would need to be absorbed and cleaned up.

Trustee George McManus also expressed concern regarding any “spillage” from the equipment, citing the legal requirements for cleanup, as well as potential damage to Village property.

“It’s not our responsibility to find a parking place for their [Warwick Grove’s] contractor,” McManus stated.

A motion on the matter will be placed on the next agenda to allow Trustee Bachman time to familiarize himself with the issue and make an informed decision. Trustee Cheney will contact the Warwick Grove HOA and let them know to hold off on drawing up any documents until a decision has been made.

Mayor Newhard commended Village Clerk Raina Abramson for her efforts during the delayed and “intense” election held on Sept. 15. She successfully coordinated the election inspectors and the polling site and oversaw the counting of a historic number of absentee ballots, as well as the almost 400 write-in ballots. Newhard congratulated Cheney and Bachman on their win in the election, an example of “democracy in action.”

Trustee Corey Bachman, at the end of his first meeting, commented that everyone at Village Hall has been very helpful and welcoming.

The next meeting of the Village of Warwick Board of Trustees will take place on Mon., Oct. 5, at 7:30 p.m. via Zoom videoconference. The public may view the meeting on Facebook Live, information is available on the Village website at www.villageofwarwick.org and Facebook page.

Village of Warwick Trustee & Deputy Mayor Barry Cheney is accompanied by his wife, Lynn, as he is sworn in at Village Hall by Village Clerk Raina Abramson.

Newly elected Village of Warwick Trustee Corey Bachman is sworn in for a four-year term by Village Clerk Raina Abramson.

Mayor Harter: Working Together Through the Pandemic 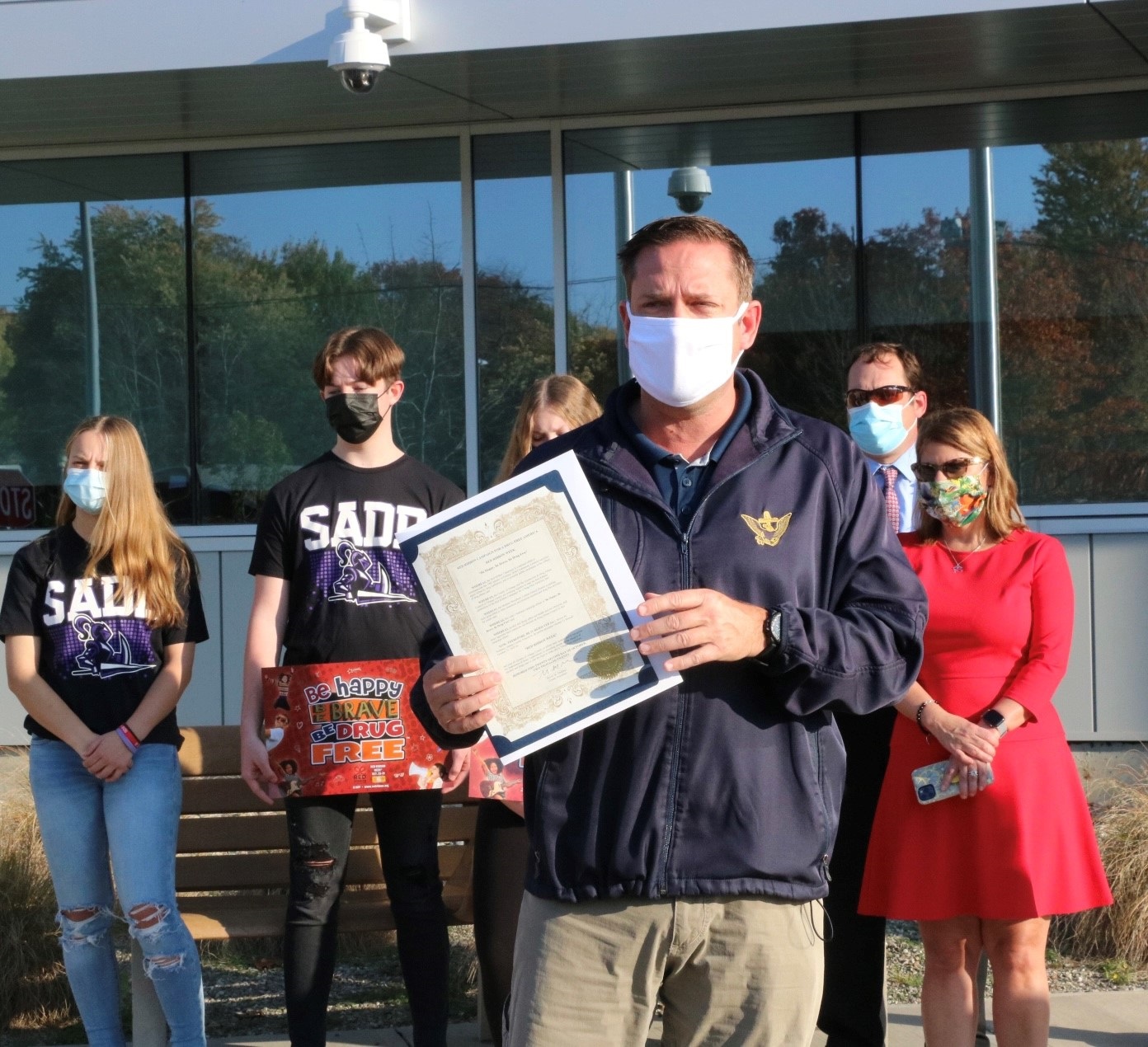