Kindergartener Ryan Curran is only two months into his elementary school career, and he is absolutely knocking it out of the park! Ryan was excited to begin school this year, especially since the District was able to welcome students back into its school buildings.

Ryan, who loves spending time with friends when he can, said he’s already added some new ones in Ms. White’s class.  Known for his love of learning and helpful nature, Ryan has already found ways of putting his new knowledge to work lending a hand to others.

“Ryan is an inquisitive student, and very proactive when it comes to his learning,” said Pine Island Principal John Russo. “He’s even done his own research on some topics, and in some cases brought back more information to share with the class than they were originally given!”

Ryan’s favorite subject is math, and he explained that what he enjoys about math is the problem-solving process. He enjoys working with geometric shapes.

“It’s exciting! I like working on one problem at a time, then you solve that and get to go on and do the next part,” said Ryan.

Ryan shared how he has already put his math knowledge to work outside of school, measuring and planning where to plant bushes and trees with his uncle, who is a local landscaper.

“My uncle does landscaping, and so I help him sometimes,” said Ryan. “We look, first, where everything – like the bushes or trees – are going to go, and then we plant them.”

Principal Russo said he and Ryan have talked quite a bit about planting trees, taking care of them and watching them grow. In fact, Ryan said he would enjoy being a landscaper one day, which would also put Ryan’s characteristic helpfulness to work.

“He really gets involved in helping people out,” said Principal Russo. “Very sweet and sensitive person, and always very kind.”

Along with studying math, Ryan also enjoys writing stories, and shared some details about one of his recent pieces – a previously untold backstory to the famous fable, The Three Little Pigs. Ryan has an interest in science too, and says he’s been saving up to buy a science kit. He’s hoping to do some research into how he might help people suffering from COVID-19. Even Ryan’s 2020 Halloween costume is all about helping people.

“I’m going to go as a firefighter,” he said.

The future is certainly bright for this intelligent, enthusiastic and kind-hearted student.

Mayor Newhard: The Things That are Important 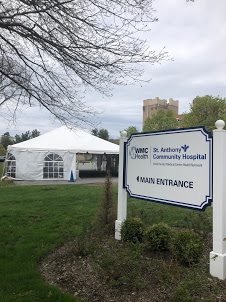